It was difficult to chose just ten of the many great bottles I’ve enjoyed this year, but these are some of the best, listen in no particular order. Reviewing thousands of young wines, I generally gravitate towards mature specimens when drinking for pleasure, and 2017 was gave me abundant opportunity to gratify that preference. What’s more, all these bottles were drunk among friends, never in large groups, and certainly not in formal tastings. To my mind, too many magical bottles are lost in excessively extensive verticals, or split too many ways. But it’s imperative, I believe, that critics and commentators always remember how great wine was made by be enjoyed.

1953 Château Haut Brion The 1953 Haut Brion is really about as good as red Bordeaux gets, and this is certainly the greatest mature vintage of Haut Brion I’ve ever had the pleasure to taste. Notes of sweet, macerated red-black fruit, rose petal, lapsang souchong tea, cigar wrapper and ash and a touch of roasted meat introduce a fine-grained, full-bodied rich and ample wine with a soft, elegant and voluptuous palate impression. Stunningly complete, intense and lingering.

1950 Château La Mission Haut Brion This is a terrific wine, and its only misfortune was to be served alongside a perfect bottle of the 1953 Haut Brion! Notes of singed cassis, plum, dark spice, coal tar, truffle and cigar ash precede a rich, powerful and quite densely extracted wine with lots of fine-grained, rich, ripe tannins, underpinning a wine of incredible intensity and concentration. Just a touch of VA is noticeable on the nose, a common feature of La Mission in this era, but it in no way detracts from the wine’s quality.

1969 Chappellet Philip Togni’s ’69 Chappellet lives up to all its many accolades, and it is probably the greatest North American Cabernet Sauvignon I’ve ever tasted. Its profound bouquet soars from the glass with notes of red-black fruit, rich cigar tobacco, black truffle, anise, subtle grilled meat and pencil lead. On the palate, the wine is full-bodied, deep and sapid, with incredible vitality, a youthful chassis of ripe tannin and an ample core of succulent fruit. What makes it so special is the alliance of ripe fruit, savory complexity and almost searing intensity. Given its classical balance, it’s impossible not to look for Bordelais parallels, and for me this evokes a mélange of some of the qualities of both La Tour Haut Brion and Mouton-Rothschild.

2001 Bruno Giacosa Barolo Rocche dell Falletto Riserva di Serralunga d’Alba Giacosa’s ’01 red label Rocche dell Falletto is really too young to include here, as the wine is still fully fifteen years away from true maturity, but as it’s one of the best Italian wines I’ve ever tasted, it seems churlish to omit it. After several hours in the decanter, its deep and profound bouquet unfolds, revealing notes of red-black cherry, roses, espresso roast and subtle hints of grilled meat. On the palate, the wine is utterly seamless and multidimensional, with a bottomless core of sappy fruit and an ample, even expansive, chassis of fine-grained tannins; while its structural elements are incredibly refined for a wine of the scale, it remains quite tight knit. This is brighter and more precise than the 2004, but without the slight asperity of the 1996, which makes this plausibly the best Giacosa Rocche dell Falletto since 1989. 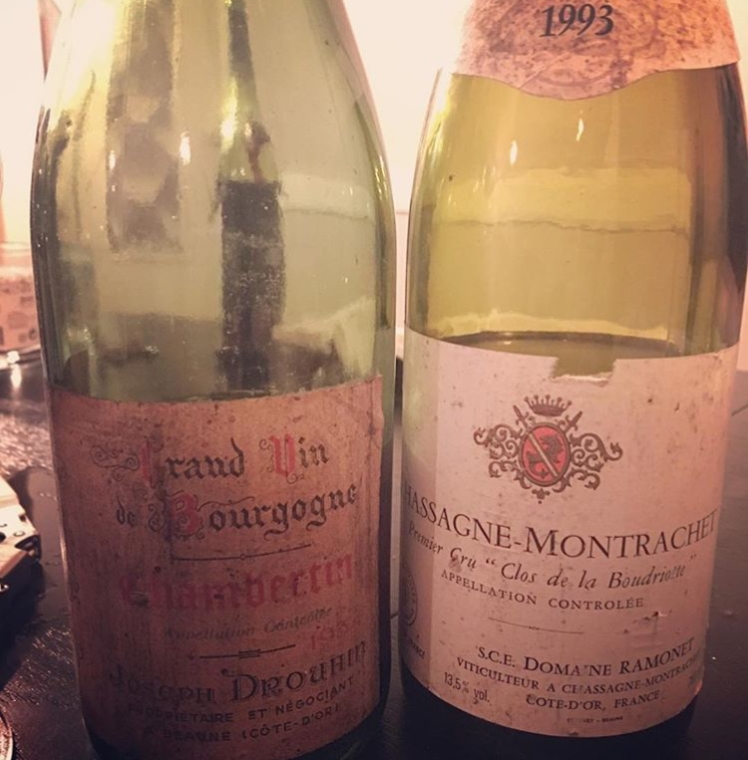 1934 Joseph Drouhin Chambertin Grand Cru The Drouhin ’34 Chambertin is a superbly graceful bottle of old Burgundy which impresses more by its elegance and harmony than by its power or amplitude—though it has plenty of both. Wafting from the glass with notes of dried cherry, potpourri, blood orange, rich soil and grilled squab, the wine is full-bodied, vibrant and full of life on the palate, with an ample chassis of melted tannins and a generous core of chocolatey fruit. It was interesting to observe a certain stylistic continuity between this bottle and the best cuvées Drouhin produce today.

1962 Château d’Yquem 1962 is a great year at Yquem, and while this is not the most powerful or textural vintage here, its perfect balance and magical sense of elegance and harmony make it one of the very best Yquems I’ve ever encountered. A magical bouquet of kaleidoscopic complexity bursts from the glass with notes of manderin, honeycomb, caramelized pinapple and citrus rind and crème brulée. On the palate, the wine is full-bodied but by no means a monster, with fresh acids, stunning purity and precision, effortless grace and a long, lingering and fragrant finish. Simply fabulous and at the peak of its powers. While this is a celebrated year it deserves an even greater reputation. 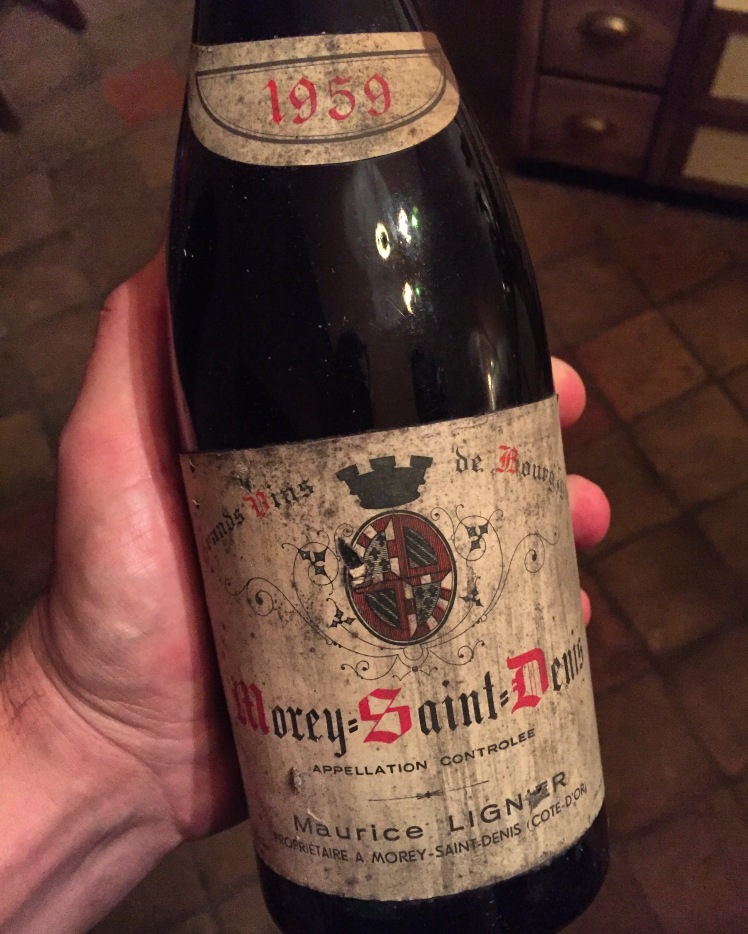 1959 Maurice Lignier Morey-Saint-Denis From the branch of the Lignier family which is today Domaine Virgile Lignier, this wine was likely a cuvée rond, including grapes from higher appellations; it certainly significantly surpassed the level typically attained by villages level Morey. The bouquet was beautiful, and full of life, wafting from the glass with aromas of sweet red fruit, cinnamon, dark chocolate and warm soil tones. On the palate, the wine was full-bodied and complete, with the expansive generosity of the vintage, a succulent core of fruit, and ripe, melted tannins, and a long, sapid finish. Testimony to how enduringly excellent this Burgundy vintage can be.

1999 Jacques-Frédéric Mugnier Musigny Grand Cru Mugnier’s 1999 Musigny is still a very youthful wine, but with a few hours’ decant gives a more than adequate sense of its immense quality. A beautiful bouquet of raspberries, black cherry, cocoa powder, violets, peony and incipient notes of rich soil and cedar introduce a pure, full-bodied wine with pitch-perfect balance and a deep, spherical core of ripe tannin, juicy acidity and reserved concentration. This is not an especially flamboyant wine, but it’s incredibly authoritative and sophisticated. Like the Giacosa, this is also a bit out of place in this list by virtue of its youth, as it’s still a decade away from its peak. 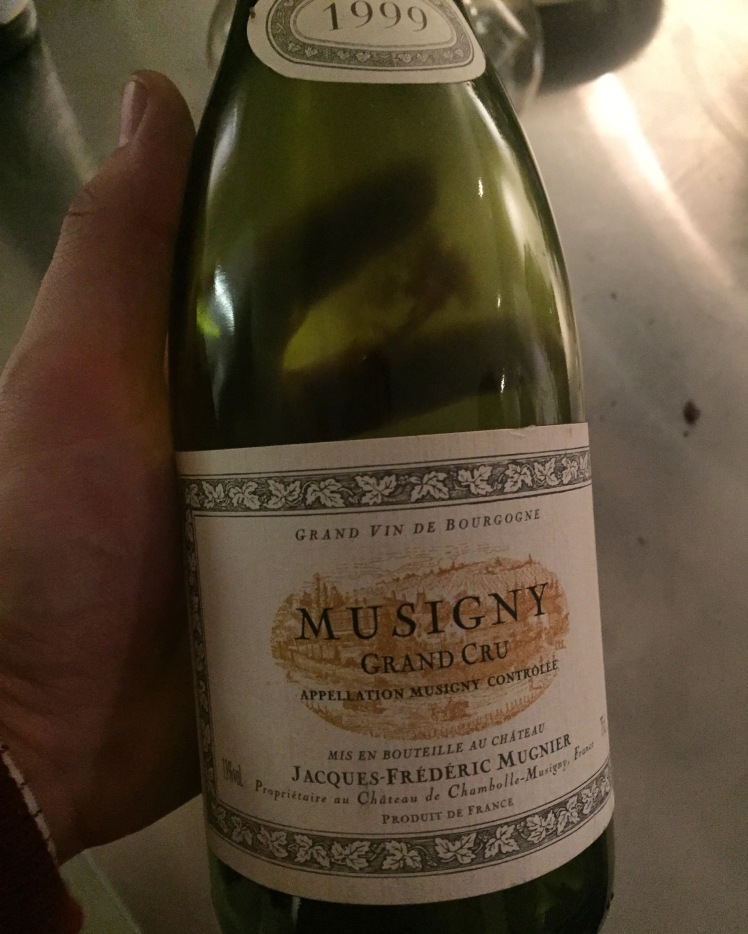 1959 Domaine Gros-Renaudot Richebourg Grand Cru A bouquet of Agen prune, dried cherry, rich soil tones, truffle, Egyptian musk and ripe strawberry introduces a rich, powerful wine of striking authority, amplitude and intensity; expansive, detailed and penetrating, this Richebourg’s textural impact is underpinned by impressive reserves of tension and energy, with lovely freshness which belies the warmth of the vintage. This wine was made by Anne Gros’ father and uncle, who used a rather rudimentary destemmer, but the wine’s tannins are nicely melted now after all these years.

1979 Rapet Corton-Charlemagne Grand Cru This is an absolutely superb wine, and among the greatest renditions of genuinely mature Corton-Charlemagne I have encountered. A bouquet of mandarin orange rind, confit lemon, fresh field mushroom, vanilla, dried white flowers and wet stones introduces a wine of superb intensity, depth and length, its textural gloss underpinned by tensile acids, finishing with sublime length and persistence. While this bottle was wide open for inspection when I drank it this Spring, this Corton-Charlemagne remains focused and precise, at the peak of its powers.

1979 Domaine Michel Gaunoux Pommard 1er Cru Grands Épenots The Gaunoux Grands Epenots is still at its absolute peak, and one of the best 1979 red Burgundies I have had for some time. A glorious bouquet of kaleidoscopic complexity bursts from the glass with notes of red plum, raw cocoa, candied citrus peel, licorice, anise and summer truffle, preceding a supple, medium-full and elegantly expansive wine, with a sweet core of fruit (likely judiciously chaptalized), rich and melting tannins, and lovely persistence. A brilliant bottle of mature Pommard.