Domaine Dugat-Py in the village of Gevrey-Chambertin produces some of the most controversial wines in Burgundy. On the one hand, critical plaudits abound: one of a handful of Domaines awarded three stars in the Revue du Vin de France’s famous classement, the Dugat-Pys’ wines have long been lauded by Allen Meadows and a succession of reviewers at The Wine Advocate. On the other, in some circles they are routinely denounced as over-extracted and over-oaked. A polarising estate, then, and also a debate which sometimes risks descending to the level of caricature, since these wines are so scarce and expensive that one has to wonder how many bottles have actually been opened by those that pontificate on their merits.

Having tasted with the affable Bernard Dugat several times, I’ve come to admire this estate very much indeed, and my admiration was only amplified when generous friends who have long followed these wines opened a selection of older vintages with me this summer.

The rudiments of the family’s approach to winemaking are simple. Old vines, all fine selections of Pinot Noir, are meticulously farmed (fully organic since 2003); yields are correspondingly low; and in the cellar these raw materials are vinified simply, with no pre-fermentation maceration and generally only partial destemming, depending on the vintage and climat. Elevage is in cooperage from François Frères, all new for the Premier and Grand Crus. The tiny cuvée of Chambertin matures in a small custom-made barrel each year, which varies in size according to the vintage’s production.

As Bernard Dugat explains, his family’s models are the classic vins de garde of yesteryear: bottles like the 1934 Clos des Lambrays. Unlike the wines of some of his neighbours, who expatiate on their preference for ‘infusion’ over extraction, these are deeply coloured Burgundies, richly endowed with fine tannins. ‘We like to make red wines’, is how Bernard puts it with a confident smile. Alcohols, however, are never elevated, for this is not an address that harvests late, and the family in fact expressly place a premium on elegance and precision—despite what their detractors are wont to assert.

The ultimate test, of course, is how the domaine’s wines have evolved over time. My sense is that the marriage of wine and wood is better today than around the turn of the millennium. The wines’ tannins (though always abundant) also seem more refined and supple today. And while I’ve occasionally encountered what I’ve identified as hints of brettanomyces in some of the Gevrey AOC bottlings in older vintages, the wines are now unfailingly pure. All that notwithstanding, the older vintages are aging very gracefully indeed, clearly differentiated by site and gaining in refinement as their tannins melt. Bottles such as the 1999 Mazis-Chambertin really do remind me of the great old Burgundies of yesteryear. So if Domaine Dugat-Py is undeniably one of the region’s most controversial producers, for me it clearly also ranks as one of its best: a fine source of artisanal, méthode ancienne Burgundies, produced by a family with a deep and longstanding attachment to the region and its traditions. 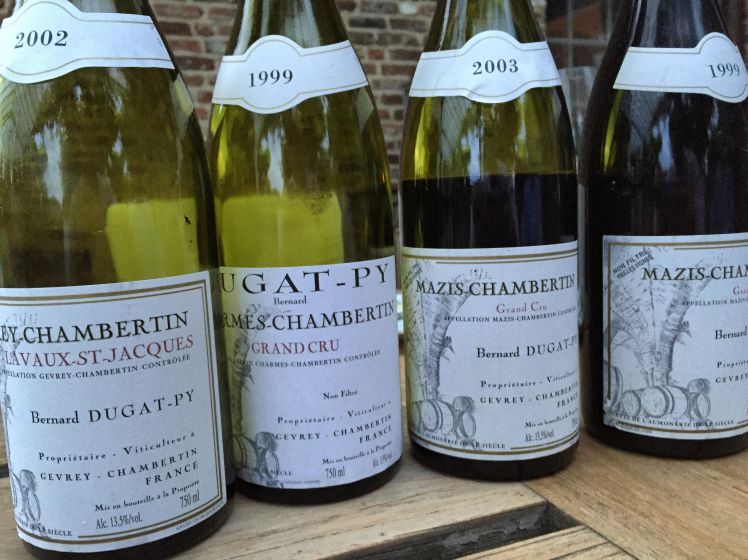 The 2005 Dugat-Py Meursault is very exciting indeed, bursting from the glass with a bouquet of pear, confit citrus, ripe apple, hazelnut and a framing of oak spice and vanilla. On the palate the wine is full-bodied, deep and very intense, in a powerful, expansive style with great concentration and extract. This has quite an old-school feel in 2005, and in a mixed vintage for white Burgundy it is an unqualified success. 93/100

The 2006 Dugat-Py Meursault is a very attractive wine, aging very well at close to age ten, and its only fault was being served next to the analogous bottling from Coche-Dury! Aromas of white flowers, peach and honeysuckle introduce a broad, glossy and full-bodied wine underpinned by saline minerality. A great effort in 2006, but just lacking a bit of the energy and focus we found in the Coche. 91/100

The 2007 Dugat-Py Chassagne-Montrachet 1er Cru Morgeot represents a lovely marriage between climat, producer and vintage. A bouquet of spring flowers, white peach and preserved citrus, framed by subtle oak vanilin, introduces a glossy, pure and precise wine with lovely concentration, grip and focus. Full-bodied but with none of the corpulence to which this site inclines. 92/100

The Dugat-Pys’ 2011 Corton-Charlemagne bursts from the glass with a youthful nose of lemon oil, white flowers, nutmeg and noble reduction. On the palate, the wine is searingly intense, with a great core of acidity and minerality, built more around energy than sheer volume, though it certainly does have grand cru heft. As I understand it, this is from vines in the Pernand end of Corton-Charlemagne, not too far from Christophe Roumier’s parcel, which makes the wine all the more impressive. Patience recommended! 95/100

By all accounts, the 1999 Dugat-Py Mazis-Chambertin was a real monster in its youth, but time has been kind to it. A bouquet of crisp black fruit, graphite, rich earth, game and woodsmoke introduces a rich, dense and three-dimensional wine with beautiful detail and textural refinement to its fine-grained tannins: a wine of poise and authority. 95/100

Bernard Dugat-Py’s 2002 Gevrey-Chambertin 1er Cru Lavaux Saint Jacques is already very exuberant, bursting from the glass—or better, decanter—with a projected and intense bouquet of brooding red and black fruits (plum, blackcurrant), rich earth and roasted game. On the palate the wine is intense, powerful and supple, just entering its drinking window and underpinned by a chassis of refined tannins and fresh acidity. This was great fun, and really a revelation give the stereotype so commonly trotted out with regard to this Domaine. 93/100

The 2000 Mazis-Chambertin is showing very well, its complex bouquet of wild berries, damson, grilled meat, vine smoke and pencil lead, becoming more floral and expressive with air, precedes a fine-grained wine underpinned by juicy acids and finishing with excellent persistence. More of an elegant mid-weight than this bottling is in the great years, where it requires more time in the cellar to reveal all its plenitude. 50-65% whole cluster.

For those who do not mind the rather jammy profile of the vintage, the 2003 Dugat-Py Mazis-Chambertin will be very appealing indeed, and represents a fine rendition of this cru in this vintage, avoiding any notion of torrefaction. A rich bouquet of ripe red and black fruit it complemented by plenty of savoury complexity: rich earth, Mazis graphite and even some incipient sous bois. On the palate the wine is juicy, supple, concentrated—and retains its freshness. In fact, I can well imagine the vintage influence being harder and harder to identify as time passes. 93/100

Lavaux St. Jacques is a south-facing climat with a cool mesoclimate (especially at night); clearly a great combination in 2005. The Dugat-Py rendition is absolutely superb, soaring from the glass with a complex bouquet of red-black fruit, rich meaty soil tones and wood smoke. On the palate the wine is amazingly detailed, with excellent balance and palate-staining persistence, its serious chassis of fine tannins enrobed in fruit of great purity. 100% whole cluster.

Bernard Dugat’s 2009 Mazis-Chambertin is a brilliant wine, and the generosity of the vintage makes this much more interesting to approach now than I had expected. The bouquet is deep and stunning, with a nose of black cherry, vine smoke, graphite and hints of game bird and soil. On the palate the abundant tannins’ glossiness brings tears to the eyes. The extraction regime, while heavy, has been perfectly managed (as has its beautifully vibrant acidity) and I have no doubts about this wine’s transparency or indeed profundity. This will be heaven in another decade and far, far beyond. 96/100